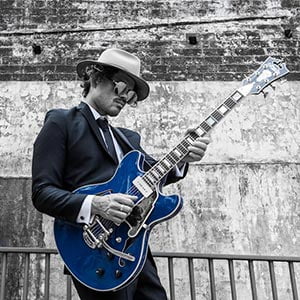 Ash Grunwald’s musical path began as a child, feeling pride and a resonance with Black American music he listened to on the radio. He is a soulful bluesman, with his voice carrying power and his lyrics carrying a message of protection of the land and sea.

His first album consisted of solely a guitar and a stomp box. From there he continued to grow, travelling many parts of the world, and sharing his potent live presence with his Live At The Corner album. His collaborations with producer Countbounce (Urthboy, TZU) earnt him an APRA Award for Blues And Roots Work Of The Year. This album, Fish Out Of Water, defied genres, fusing electronic beats with the blues.

He received multiple awards following that. His acclaimed single ‘Longtime’ received another APRA Award for Blues And Roots Work Of The Year. Add five ARIA Award nominations, MBAS Blues Performer of the Year and the AIR Best Independent. His single ‘Walking’ was featured in the Hollywood hit movie ‘Limitless’, which starred Robert De Niro and Bradley Cooper.

With further successful collaborations such as covering Gnarles Barkley’s ‘Crazy’ with Scott and Andy from The Living End, Ash crossed over into the more commercial world of music. Ge teamed up for a new album with Ian Perez (keyboardist for Wolfmother) and Pete Wilkins (former drummer for Blue King Brown), along with American record producer Nick DiDia.

A passionate activist, Ash and his wife Danni Carr created a company called Earth Bottles, to promote more mindful consumerism and to raise funds for not-for-profit organisations that are working for the greater good of everyone.

He has also released his own book – Surf By Day, Jam By Night and has a podcast ‘Soulful Conversations’ featuring conversations with people such as John Butler, Ziggy Alberts, Missy Higgins, Kate Cerberano, and Josh Teskey.