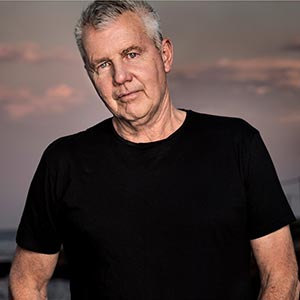 Daryl Braithwaite is one of Australia’s premier performers, with an award-winning career that spans more than 35 years.

His voice is one that captures the mood of a song with its soul and warmth.

Daryl’s success began in the 1970s singing with Sherbet, the first Australian band to top the $1 million mark in album sales here. They had 20 Top 40 Australian singles, achieving a number 1 hit in Australia with “Howzat” and reaching number 2 in the UK.

Moving on from Sherbet into a solo career, Daryl saw many successes with his album “Edge”. It topped the ARIA charts and saw four hit singles come from it, including gold single “One Summer”. His next album “Rise” reached multi-platinum status, with an additional two hit singles in the charts including the platinum single “The Horses” at number 1 for 3 consecutive weeks. The 1991 Australian Music Awards named it “Song of The Year”.

His solo success saw him perform sold out shows across Australia, as well as touring extensive throughout Canada, USA, UK and Europe.

Daryl Braithwaite entered the ARIA Hall of Fame in 2017, and continues to be in great demand, performing live at public and corporate events.