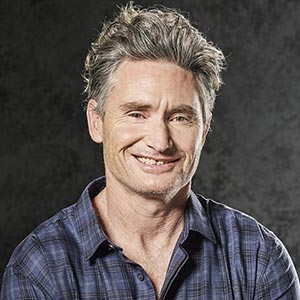 Hughesy has become one of the biggest names in Aussie comedy, with his iconic Australian style and hilarious routines.

He spent 12 years in Melbourne’s “Nova breakfast” team, with many years on Network Ten TV shows such as “The Project” and AFL show “Before the Game”.

Leaving his radio and television jobs in 2013, Dave shifted his focus back to stand-up comedy, touring a brand new show “Pointless”. Aside from selling over 60,000 and covering every corner of Australia, Hughesy toured overseas, in London’s West End, the Edinburgh Fringe and LA and Montreal.

Returning to the airwaves in 2015, Dave and co-host Kate Langbroek had the drive slot time on the Hit Network. Teaming up with Ed Kavalee in 2019 the show became the “Hughesy and Ed Show”.

Hughesy continued his TV career with his popular show “Hughesy We Have a Problem”. This show saw rave reviews, big audiences, and an extension to four seasons going out across Australia. He judged alongside Dannii Minogue, Jackie O and Urzila Carlson on Network Ten’s first season of the smash show “The Masked Singer”, where twelve celebrities in bizarre disguises take to the stage, and a group of musical detectives try to unearth who is behind the mask.

Hughesy excels as a comedian, broadcaster and presenter, and is a true Aussie comic genius!