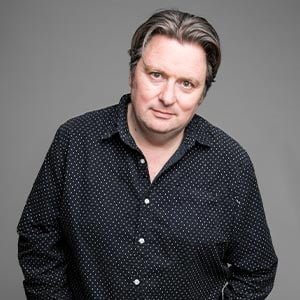 Dave O’Neil is one of Australia’s stand out stand-ups. He’s performed at International Comedy Festivals and comedy clubs across Australia over his 20+ years in comedy.

He’s one of the most well-known guests of Spicks & Specks on ABC TV, having appeared on the show over 60 times. He’s graced TV screens with many other comedians, such as Adam Hills in Good News Week and Gordon Street Tonight, Hughesy on We Have A Problem and The Yearly with Charlie Pickering. He also featured as Team Captain on Tractor Monkeys, an ABC Comedy quiz show. Most recently he’s played Bob Stanley, the inept lawyer on Kitty Flanagan’s ABC sitcom Fisk.

He’s the co-host over several podcasts, The Junkees with Kitty Flanagan and Somehow Related with Glenn Robbins. On his own podcast, The Debrief with Dave O’Neil, he drives a comedian home from a gig and discusses comedy and their career.

His talents don’t end there! Dave has written books, films, and acted alongside Eric Bana in The Nugget.

Dave is also a sought-after corporate entertainer and MC, as he brings his observational humour and humility to the stage.

If you’re looking to hire a comedian for your next event, Dave O’Neil, would be the perfect choice to include in your entertainment plans.