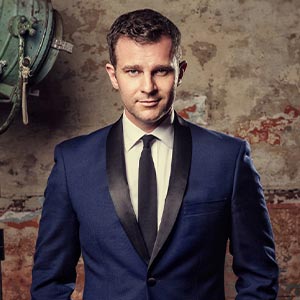 He’s received several awards for his service to the arts and entertainment, including the Medal of the Order of Australia in 2019 and the Adelaide Cabaret Festival Icon Award in 2020.

The largest cabaret festival in the world, the Adelaide Cabaret Festival, appointed David to the role of Artistic Director, extending his role in the entertainment industry beyond performer.

David has worked as a popular television and radio host, on the Today Extra show for the Nine Network, Weekend Today and the relaunched Wonderful World of Disney. He’s co-hosted the annual Carols by Candlelight, Randwick’s 2020 Gold telethon and the special event “Music from the Home Front” for ANZAC Day in 2020.

David’s success as an Australian leading musical theatre star has been achieved internationally as well. He captivated New York with his award-winning cabaret show and regularly performs as a headlining artist and MC across the USA.

He’s voiced the character of the news reading Koala in Zootopia, an Oscar winning animated feature film by Disney. In the vein of children’s entertainment he has also published a children’s book “Stupid Carrots”.

In recent years David has achieved instant chart success with his albums “Baby it’s Christmas” and “Back in the Swing”, followed by a national concert tour. Having been able to celebrate chart successes and platinum sales awards over the years, David is certainly one of Australia’s biggest selling recording artists!