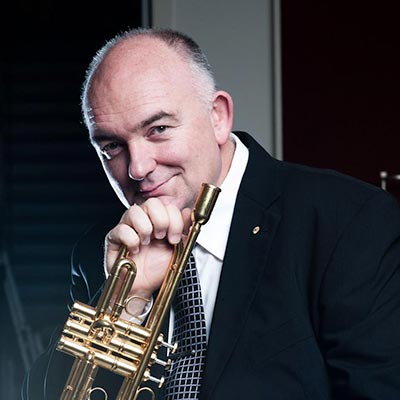 He has performed at jazz festivals across the world, including Montreux, Nice, North Sea, and the Hollywood Bowl. He’s appeared in world-famous jazz clubs, The Blue Note, Birdland and Village Vanguard in New York. The New Morning in Paris and Ronnie Scott’s and the Tokyo Blue Note in London.

With a long history of musical talent, his career has been diverse and atypical of most jazz musicians.

His performing career has seen him play for Her Majesty  Queen Elizabeth and for US Presidents Bush and Clinton. He’s performed the Royal Albert Hall for the BBC Proms, recorded with the London Symphony Orchestra, INXS and written the opening fanfare for the Olympic Games!

James was appointed a member of The Order of Australia and has received several honorary Doctorates. He leads his own music Academy as an Adjunct Professor at the University of South Australia.

He was even host of the national TV show “Behind the Wheel” and was a presenter on Top Gear Australia – his love of cars is well known!

James Morrison Solo (30mins)
Corporate speech/performance with computer. This is a unique way to get your message across, with music as an analogy. James uses digital technology to create songs right in front of the audience. He can demonstrate any number of fascinating techniques used in music production and tie them into your business. All done with his trademark humour and entertainment.

James Morrison Big Band
12 piece big band for those occasions when Bigger is Better. A host of original arrangements and popular tunes presented as a show that includes the stunning vocal talents of Emma Pask.