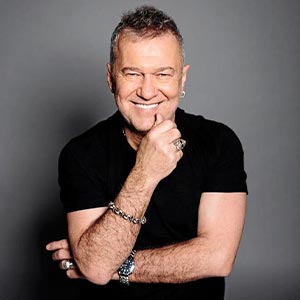 The heart and soul of Aussie rock and roll is Barnesy – Jimmy Barnes. Selling more records in Australia than any other home-grown artist, he’s enjoyed 17 number 1 albums – even more than The Beatles.

Bringing fury, danger and wit to the stage as Cold Chisel’s frontman, Barnesy delivered some iconic and intense live performances. Cold Chisel became the most powerful live act in Aussie pub rock. Many of their songs are virtually national anthems – Cheap Wine, Khe Sanh, Flame Trees, When The War Is Over and You Got Nothing I Want.

Blood Moon, which was their ninth studio album, was their third number 1 album in the ARIA charts. It had been 21 years since they’d topped the charts with their other number 1 albums, Swingshift and Circus Animals. Barnesy’s solo releases also topped the charts, with Bodyswerve and For the Working Class Man, which cemented his place at the centre of a generation, and gave him a signature tune.

His story has filled multiple books and his status in Australian rock’n’roll is set with a two-time induction into the ARIA Hall of Fame. His powerful connection with live audiences over decades has certainly classed him a league of his own.

Not limited to working just in music, Barnesy has channelled support into numerous charities and was appointed as an Officer of the General Division of the Order of Australia. This achievement was for his distinguished service to the performing arts as a musician, singer and songwriter, and through support for not-for-profit organisations.