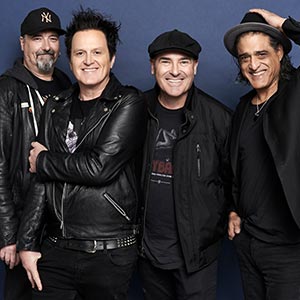 Kids in the Kitchen

Back touring for the first time since the 80s, Kids in the Kitchen are shining as bright as ever!

Featuring an all-original line-up, Scott Carne is on lead vocals, Claude Carranza on vocals and guitar, Bruce Curnow on drums and Craig Harnath on bass. The band is more polished than ever and has a trail of rave reviews following them after their support gig on Culture Club’s 2016 Australian tour.

Their debut album “Shine” went double platinum and made them a household name. This album achieved 4 Top 10 singles – “Change in Mood”, “Bitter Desire”, “Something That You Said” and “Current Stand”.

Their catchy lyrics, infectious dance-infused pop and energetic live shows ascended them into stardom quickly. The band spearheaded the Aussie New Romantic movement, with front-man Scott Carne at the helm. “Say It’ and “Revolution Love” were Top 20 hits from the release of their second album “Terrain”, seeing a world tour for Kids in the Kitchen and the breaking of capacity records at all major venues across Australia.

Grab your friends and get along to a Kids in the Kitchen gig for a show that’s bouncing with fun, energy and all the hits that you remember!