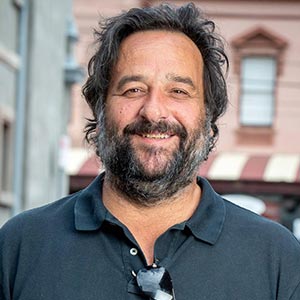 With an acid tongue combined with the appeal of a scruffy, laid-back larrikin, Mick Molloy is one of Australia’s most recognised comedians.

His industry accolades and box office appeal has proven his winning combination of razor-sharp wit and creative mind. For more than 25 years he’s brought his brand of Aussie humour to TV, radio and film.

His initial rise to fame was in Australian television, starting with D-Gen then The Late Show.

Since then his television appearances have expanded, with “Before The Game”, “Any Given Day”, “Saturday Night Football”, “The Jester”, “The Nation”, “Kath & Kim” and he was a regular on “The Panel”. He also wrote, presented and produced his own television show “The Mick Molloy Show”.

From television to the big screen, Mick has written, produced, directed and starred in many movies. “Boys Town”, “Tackle Happy”, “Bad Eggs” and “Crackerjack” are just a few. “Crackerjack” led to a nomination for Best Original Screenplay at the Australian Film Institude Awards in 2002. Mick was also named Australian Star of the Year for his acting performances in both “Crackerjack” and “Bad Eggs”.

In addition to his on-screen successes, Mick is one of Australia’s most accomplished radio performers. Having been on radio since 1990, he is best known for the hilarious radio program “Martin/ Molloy”. Airing on 54 stations across Australia, it revolutionised the drive time radio slot and is still one of Australia’s most successful programs to be broadcast.

Mick Molloy is a master of comedy genres, and his presence guarantees a full house!