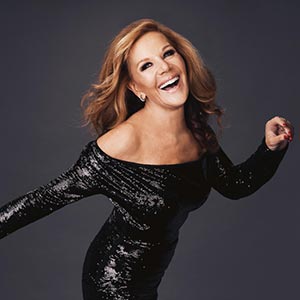 Forging a lengthy career in show business, Rhonda Burchmore continues to turn heads and elicits thunderous applause with her performances.

Her smile could light up the Sydney Opera House and she is admired for her big heart, big personality and huge capacity to give back to her industry.

London’s West End saw Rhonda performing alongside Mickey Rooney and Ann Miller in “Sugar Babies”, with Anthony Newley in “Stop the world I want to get off” and opposite David Atkins in “Hot Shoe Shuffle”. Her cabaret spectacular “Red, Hot and Rhonda” opened at the Crown Casino to over 60,000 people.

She played Tanya in the original Australian production of “Mamma Mia!” and co-starred with Geoffrey Rush in “The Drowsy Chaperone”. She has performed lead roles in “Annie Get Your Gun”, “They’re Playing Our Song”, “Guys & Dolls”, “Mame”, “Eurobeat”, “Into the Woods”, “Respect – A Musical Journey of Women”, “Calendar Girls, “Jerry’s Girls”, “La Cage Aux Folles”, “Little Orphan Trashley”, “The Boyfriend”, “Easter Parade”, “Urinetown” and “Song & Dance”.

Her 2017 outrageous show “Twins” had a sell-out premier season at the Melbourne International Comedy Festival and headlined the Adelaide Cabaret Festival. She co-produced and starred in it, then the following year continued that same path, producing, co-writing and starring in “ABBA-solutely Fabulous”. It continues to play sell out engagements across the country.

Most recently, Rhonda won the hearts of Australians and placing third when she appeared on “I’m A Celebrity Get Me Out Of Here”. She was already a familiar face on Australian morning television, and has a long line of performance credits on long running variety shows. She’s appeared on “Good Morning Australia” with Bert Newton, “Hey Hey it’s Saturday”, “The Midday Show”, “The Mike Walsh Show”, “The Don Lane Show”, “Spicks and Specks” and “Carols by Candlelight”. Rhonda has featured as a guest on television’s “Love Child” and “Kath & Kim”.

Rhonda has won a string of awards of the years. She received the Cabaret Icon Award at the International Adelaide Cabaret Festival, and Female Vocal Performer of the Year at the MO Awards and ACE Awards. She was also awarded an OAM in 2014 for her services to the performing arts and community.

From cabaret shows to five recorded albums and an autobiography, Rhonda has it all under her glittered belt!