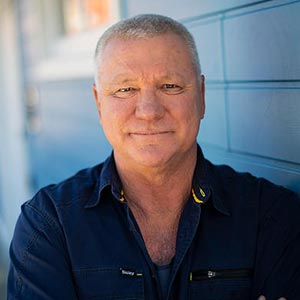 Laid back larrikin Scott Cam has won millions of fans across Australia and is one of the most loved television personalities.

Scott has enjoyed over 20 years of working across a number of popular programs, with his first appearance being on “Backyard Blitz”. He was the show’s resident builder/carpenter throughout the programs run. Following that, he co-hosted top-rating lifestyle programs such as “Domestic Blitz”, “Random Acts of Kindness” then regularly appeared on “Burke’s Backyard” and “Renovation Rescue” specials.

His experience in the construction industry made him the perfect candidate for these shows. He was appointed to the role of mentor in the return of “The Block”, and was an occasional judge on the show. His success on “The Block” has continued over many seasons.

Scott’s popularity won him a Silver Logie for Most Popular Presenter and the prestigious Gold Logie award in 2014. In later years he received further Gold Logie nominations.

Not just limited to the screen, Scott has had regular spots co-hosting Saturday morning shows on 2GB and 2UE as well as Triple M’s popular “Wrong Side of the Bed”.

He’s also written three building and home renovation books and was the resident DIY expert for the lifestyle magazine “HOMES+”.