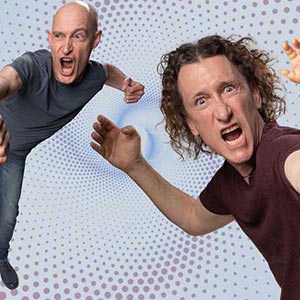 An international comedy phenomenon, The Umbilical Brothers perform a unique fusion of vocal and physical comedy. David Collins and Shane Dundas were named as two of Entertainment Weekly’s “100 Most Creative People in Entertainment”.

They’ve entertained stadiums of people, performed in 38 countries, supported Robin Williams, appeared on “The Late Show with Stephen Colbert”, after James Brown at “Woodstock ‘99” and in front of the Queen.

From national to international acclaim, and a slew of awards, The Umbilical Brothers lay claim to two BAFTAs, an EMMY, a Logie and a Helpmann for “Comedy Performers of the Year”. The list doesn’t stop there – they’ve also been awarded an Edinburgh Critics’ Choice Award and for five years running, they’ve won the Australian Entertainment Industry’s MO Award for “Best Comedy Group”.