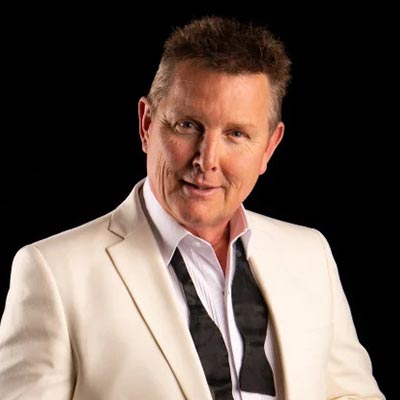 The early days of Tom Burlinson’s career was on the screen, where he played roles in television programs such as “Kirby’s Company” and “The Restless Years”. From the small screen to the big scree, Tom was cast in the title role of “The Man from Snowy River” which was a huge box office success and led to a succession of Australian and international acting roles for him.

It was from his first professional singing engagement, the voice of the young Frank Sinatra in the “Sinatra” mini-series, that Tom’s musical abilities began to blossom. In 1998 he re-visited the music of Frank Sinatra, appearing in “A Tribute to Frank Sinatra” at Taronga Zoo. This inspired him to create the sell-out show “Frank – A Life in Song”, which ran successful seasons across Australia.

The show ran internationally, with Tom receiving standing ovations at every performance.

Tom was cast in Mel Brooks’ musical “The Producers” and returned with “Frank – More from a Life in Song”, a sequel to the first show. He took on the role as a judge on the hit television show “Australia’s Got Talent” for three years, and continued to perform in “Frank”, and a cabaret called “Simply Sinatra”, with just piano, bass and drums.

It has become clear that there is an on-going demand for a musician such as Tom. He performs at corporate events, in concert for publicly-funded organisations and appears at charity fund-raising nights.

He can be accompanied by his fabulous 16-piece big band, or if space is limited, have musical arrangements available for an 8-piece ensemble.

For lovers of the swinging sounds of jazzy arrangements, Tom Burlinson is one of Australia’s most popular entertainers, and you can see him live at your function!