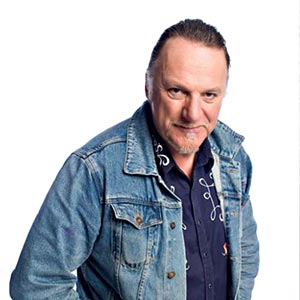 He enjoyed chart success with his bands “Jo Jo Zep and the Falcons” and “Ol’ 55”, but he also recorded and toured with acts such as Dire Straits, Cold Chisel, Tiny Tim, Roy Orbison, Skyhooks, Garth Brooks and Elvis Costello.

His broad career saw him in TV production, comedy writing and public speaking, including his 16 years on “Hey Hey it’s Saturday”. Wilbur has starred on television in “The Fast Lane” and “The Flying Doctors”, and had acting roles on “Dead End Drive-in”, “Mad Max”, “Jenny Kissed Me” and “The Coolangatta Gold”. His theatre appearances included acting and singing in “Hey Hey it’s Cinderella” and touring internationally with “The New Rocky Horror Show” after sell-out seasons across Australia.

A regular performer, Wilbur plays with a range of bands including “Jo Jo Zep and the Falcons”, funk outfit “The Turbos”, “The Good Rockin’ Daddies” and his own Jazz group “Wilbur Wilde’s Blowout”.